This is an amazing house; the foundation dates from the 12th century. (Sorry, I forgot to take a photo of the house. It will come later)

According to a local historian, the row of houses in which #7 forms but one part were the first to be built in the area. The seigneur provided the housing for his workers some time in or following the 12th century. There are interesting remnants from many of the previous centuries still visible in the house. 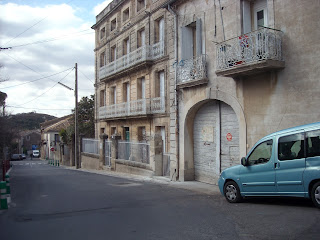 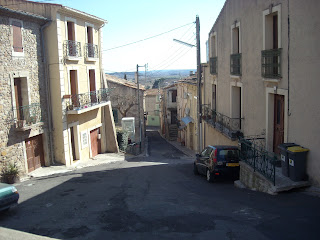 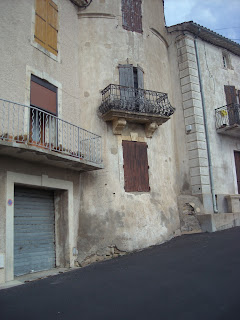 Some the of the charming old houses in Neffies.

At street level in Libellule there is a series of rooms. At some point in history the first section was used to house animals – possibly a horse. The room behind this contained a wine-making area (this is wine country after all). The third room contained rubble from when the roof collapsed many years ago; the current owner dug out truckloads of this rubble and cemented the floor to make it usable

Currently the front section contains a tidy daybed and is reported to be a great place to sleep when the weather gets hot, as I'm sure it will here in the south of France. Not this month though.

Houses in this area certain display extreme adaptability in their use over the centuries.

When you enter the street-level door to Libellule's living quarters you face a staircase comprised of logs, tiled, and well worn through use. 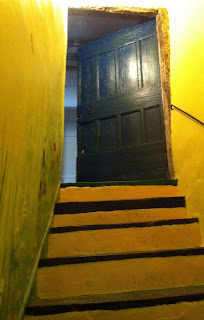 The entrance staircase to the living quarters. 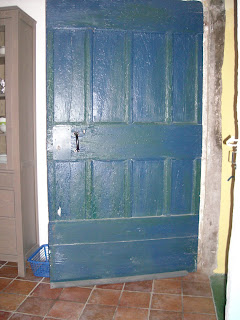 The door at the top of the stairs, dating from the 1700s 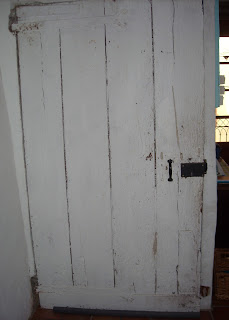 Same door as shown above – from the interior. Note the old hinges near the top and the bottom of the door.

We need to lock the above door when we're home because it's so old it maintains the right to do as it pleases, in this instance to hang ajar, allowing a draft. 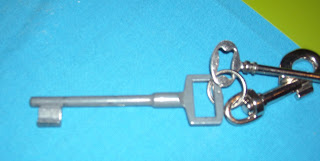 This is the key to the interior door; it's about 6” long.

There is evidence of the history of this house at every turn, lovingly retained over the years by successive owners. 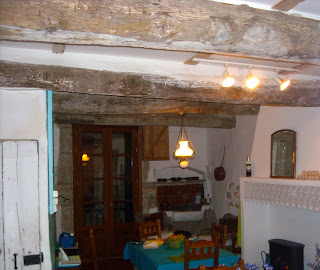 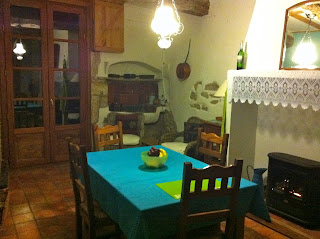 Two views of the dining area with the plastered walls and portions of the original stone construction left exposed.

Note the heavy old beams in the ceiling and the remains of the original fireplace, no longer in use, on the right. At the back is the old dry sink. The window in the centre of the photo looks out onto the rue/alley. When you open the door there's a teeny balcony, about 18” deep and three feet wide with a wrought iron railing, very Mediterranean. 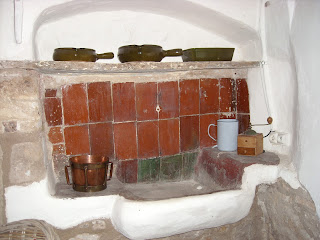 This is an old dry sink on the front wall of the dining area. That small dot on the right side appears to be a drain hole, no longer in use...like the sink itself. 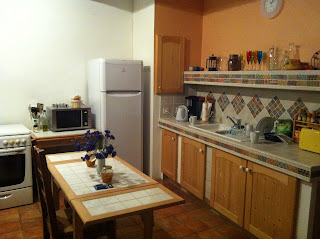 View of the kitchen area
The stove is gas and cooks with the speed of light; there's a washer and dryer and the bathrooms are well-appointed and modern, the frig is modern and electric with more than adequate space for all the cheese, tartine, pate and moutard dijon than you can store;

There's an epicerie a three-minute walk away with everything you need including fresh meat, vegetables and fruit, and the all-important baguette, so food is readily available. Oh, they have a canned duck (if you can believe it) that's to die for.

When its windy the breezes howl through the eaves of the house and there's no central heating. The landlord has provided electric heaters for the rooms so in spite of the antiquity of our surroundings, we are quite snug.

Evidence of the original stone construction is still visible in the plastered overlay throughout the house; whether the latter was to fill gaps in the stonework, or to hold it together, I have no idea. The look is charming. 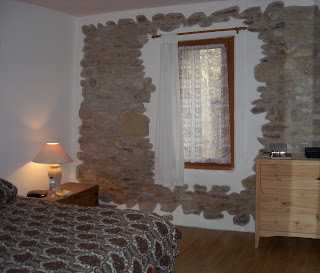 A photo of the bedroom I'm using, a blend of the old and the new.

The current flooring is tiled in a broad plank wood pattern, a modern update that retains the ambiance. 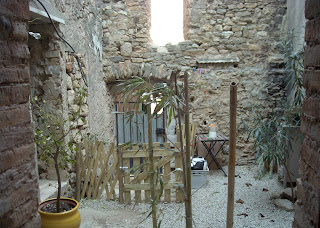 A view through my bedroom window. The walls are ancient; the puppy poo from the neighbouring dog is from this century.

The current owner of the house believes that the back part of what is currently his house was previously part of another house, there being a step up from the kitchen/dining area to my bedroom.

Since the above enclosed garden is the only one I've yet seen in the area, I wonder if the space had originally been part of the back of the house we're in. Otherwise, I can't figure out how the residents would have accessed the space.

The steps in the house are a challenge; each stair tread is a different height than the one before and the one that follows, often catching your toes as you climb. Obviously there were no building codes when they were built. 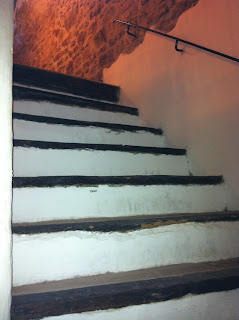 Stairs to the upstairs sitting area. 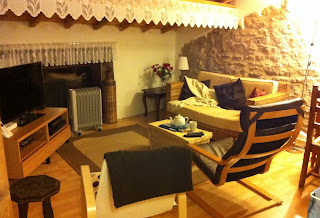 The upstairs sitting area. The TV  has 500 stations; I've only managed a couple of movie channels, in English – what a cop-out, eh!

Probably most important, the bathrooms are airy and modern with hot water that arrives instantly. 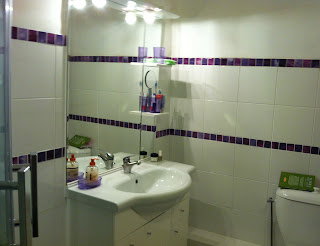 My bathroom with the ever-present Sudoku book for contemplative relaxation.

Libellule is surely the best of both worlds.

For a little change of pace, I'll slip in here a photo of the banana and chocolate crepe we had a couple of days ago. Go ahead and drool ;-) 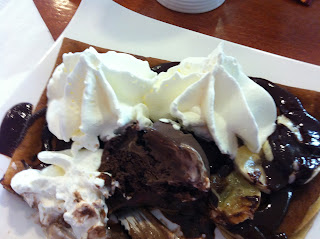 I could display many more photos, but I think you get the picture – ha!

Coming up,  I'll give you a taste of various amazing locations we've visited, provide some commentary on getting around by car in southern France and observations about the French people, particularly relative to their driving habits!!!

There will be a special feature – Blunders, Bloopers and Blatant Idiocy, being tales of two women trying to make their way in a foreign land, speaking a foreign language and driving a foreign car.